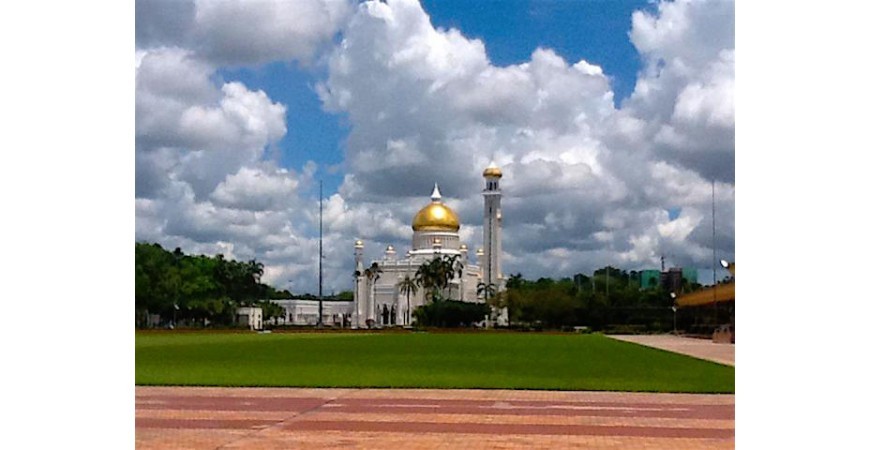 A Canopy Walk in Brunei

In April, 2013, I spent 3 days in Brunei as part of my mission to visit every nation of Southeast Asia. Brunei was the second last country on my list (the last was East Timor, which I would visit in 2015). Today on the blog, I'd like to share some pictures and impressions of Brunei Darussalam, the smallest country in ASEAN apart from Singapore.

As many of you will know, Brunei is much reduced from its pre-colonial size. During the colonial era it was in fact bifurcated, leaving 2 non-contiguous pieces. If you don't want to go from one to the other by road, crossing the Malaysian frontier twice along the way, then twice again on the way back, you have to take a boat, which is what I did. More on that later.

Here's a map of the island of Borneo, showing the current borders: 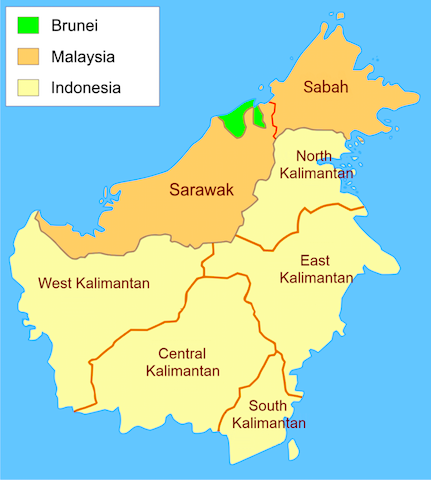 Setting off from Kuala Lumpur after a short stay there, I landed in Brunei's capital, Bandar Seri Begawan, late on a Friday morning. All the arrangements for my trip were made by Borneoguide.com, whose representatives met me at the airport and drove me to the agency's office in downtown BSB, as locals call the capital. There we went over my itinerary and finalized my tour options. In essence, I was going to have a 2-day, 1-night eco lodge experience in the other, smaller part of Brunei, to start that afternoon. On my return, I would have a night in BSB. Before any of that, however, there was the matter of the Friday prayers. The office was closing for the duration, 2 hours, so I would have to amuse myself until it re-opened.  Unfortunately, everything else was closing, too. The solution: I made a beeline down the road for an ATM and then the Coffee Bean & Tea Leaf, where I was able to get a coffee and a snack just before the doors closed, and then relax on their outdoor terrace until the prayers ended.

The main prayer venue downtown is the Omar Ali Saifuddien III Mosque. It's named after the present Sultan's father. 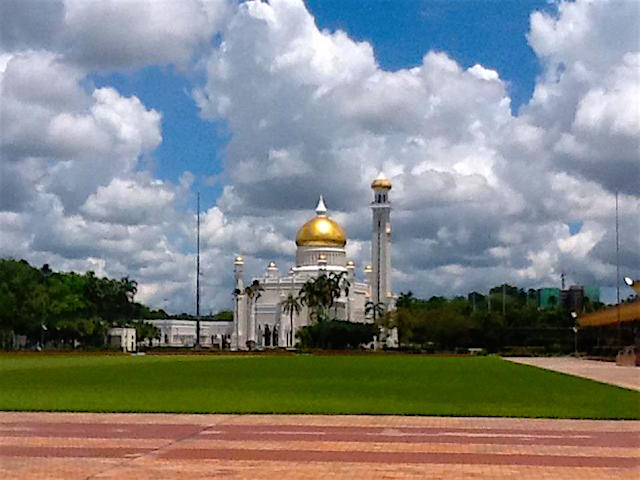 Prayers over, I returned to the Borneoguide.com office, and they whisked me to the dock to get the passenger boat to Temburong, as the other piece of Brunei is called. It was not a long journey. I was met at the other side by a young woman, a guide from the Sumbiling Eco Village. I was then driven to the village and shown to my accommodation, which was a riverside tent. I believe I had a nap.

It turned out that the eco village venture was run by the inhabitants of one local longhouse, and very keen they were, too. That afternoon and evening, I was taken to see the longhouse and meet the extended family. I was told that most of them had recently converted to Islam.  However, they were very proud of their Iban traditions. After dinner, I was taken on a night walk along a forest path. By chance, I was the only guest that weekend, so I was outnumbered 4-1 by my guides, whose own numbers were augmented by several children from the longhouse. Everybody was keen to point out the nocturnal creepy-crawlies and interesting plants.  Bedtime came early in preparation for the next day's excursion into the national park, the highlight of which was to be a canopy walk.

First, there was another boat ride from the eco village into Ulu Temburong National Park. I was accompanied by the young guides Adila, who was then 20, Farin, only 17 and apparently a guide-in-training, and the comparatively geriatric Hendry, 24, who acted as boatman and was in charge of the machete. The picture below is of the three of them in front of a waterfall that we saw later in the day. 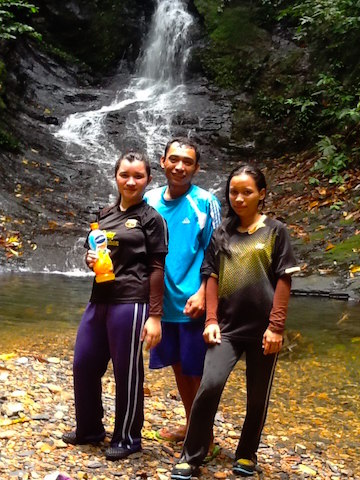 Hendry informed me that he was the last non-Muslim in the longhouse. He considered himself a free thinker. I wonder if he's still holding firm in 2018?

The canopy walk was kind of a "facing your fear" experience for me. Heights make me very nervous. My only pictures are from the caged-in towers at either end of the walk because I couldn't pry my hands off the railings on the bridge between. There was no wind, thank God, so the bridge didn't sway when I was on it. Of course, the views are stunning. There's no sign of human habitation as far as you can see. 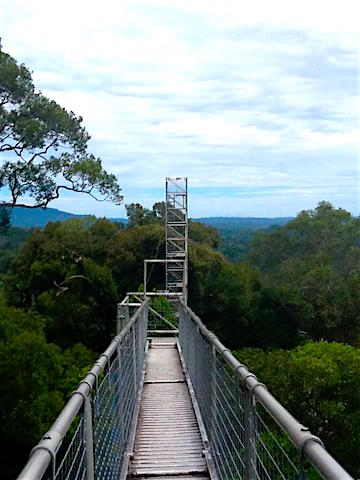 After I carefully clambered back down to ground-level, we hiked back to the boat station to go see the aforementioned waterfall. 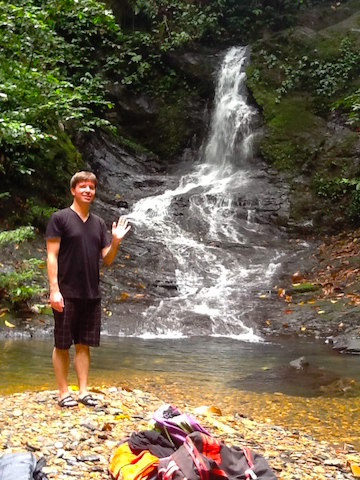 Getting there involved a hike of about 500m up a rocky streambed. I managed to fall flat on my back twice, saved from serious injury both times by my backpack, with my iPad inside. Spine, backpack and iPad all survived intact and in working order. Who says Apple products aren't durable? As you can see in the photo above, I was wearing flip flops, which were not a practical choice for the hike, but I didn't want to soak my walking shoes...

We returned to the eco village in time for lunch, which was in fact a cooking class. I learned how to make chicken, rice, and vegetables in a bamboo tube. Then it was back on the passenger boat and back to BSB. I don't normally like package tours, but I was completely charmed by the whole experience, mainly because of the young people, I think.

It was mid-afternoon when I check into my hotel downtown, and all I wanted was a nap. When I woke up, I could see out the window that the light was fading. I wandered out and down to the riverside with the vague aim of hiring a boat to take me over to the floating kampong, or water village. I had barely appeared on the quai when a boatman hailed me. We haggled a bit, and then he settled me in his boat and off we went.

The great 19th century naturalist and explorer Alfred Russel Wallace, in his seminal book 'The Malay Archipelago', wrote that "true" Malays always prefer to live on water. I had heard that this kampong, called Kampong Ayer, was one of the largest still remaining in Southeast Asia. It is very large, but also very modern.  Instead of wood, bamboo, and thatch, there was this: 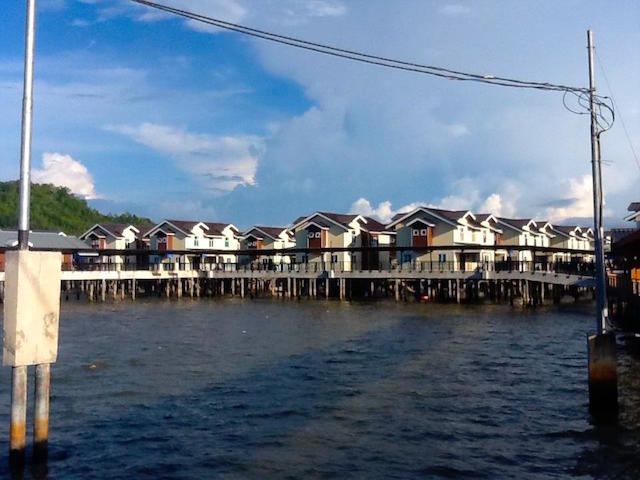 There was also a large school, a mosque, and a community centre. I was interested to note that the water not very deep. Unfortunately, I had come too late in the day to see the small museum about the kampong's history.

My final evening in Brunei consisted of wandering around the centre of BSB, and dinner in a Chinese restaurant. I found BSB to be a compact and walkable little city, very manicured and orderly. It may be the only place I've been in Asia where motorized vehicles routinely concede the right of way to pedestrians. Although Brunei is an oil-rich state, it's not ostentatious at all. To my eye, the main clues to its wealth are the absence of motorcycles and the ubiquitous presence of foreign workers in the service sector.

If you're planning a visit to Brunei, I recommend the services of Borneoguide.com. You can find their website here: http://borneoguide.com