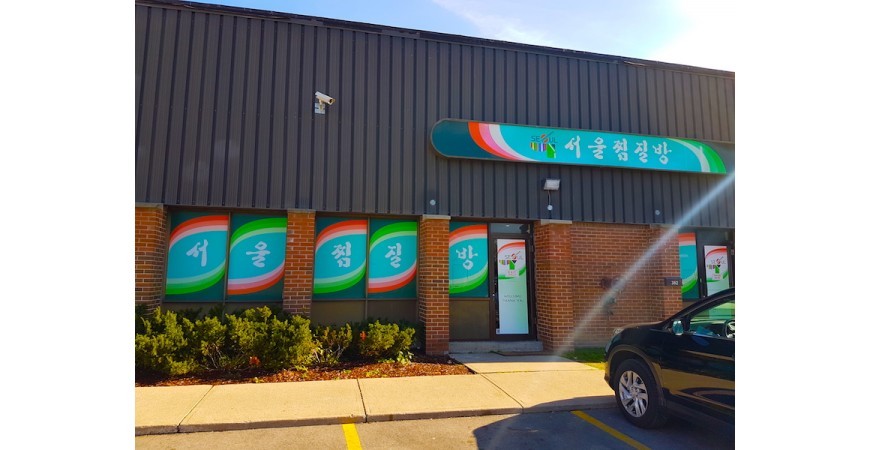 Although I lived in Korea for over a decade, I was never interested in zimzilbang (also spelled jimjilbang), or saunas, in my early years in the country.  Then I developed back pain and became intensely interested when I realized the therapeutic benefits of a good long soak. When I returned to Canada to live in a small town in Ontario, I resigned myself to doing without, or perhaps trying to install a hot tub in my basement.

Imagine my excitement, then, when I discovered the existence of the Seoul Zimzilbang in North York, a municipality in the Greater Toronto Area (GTA). 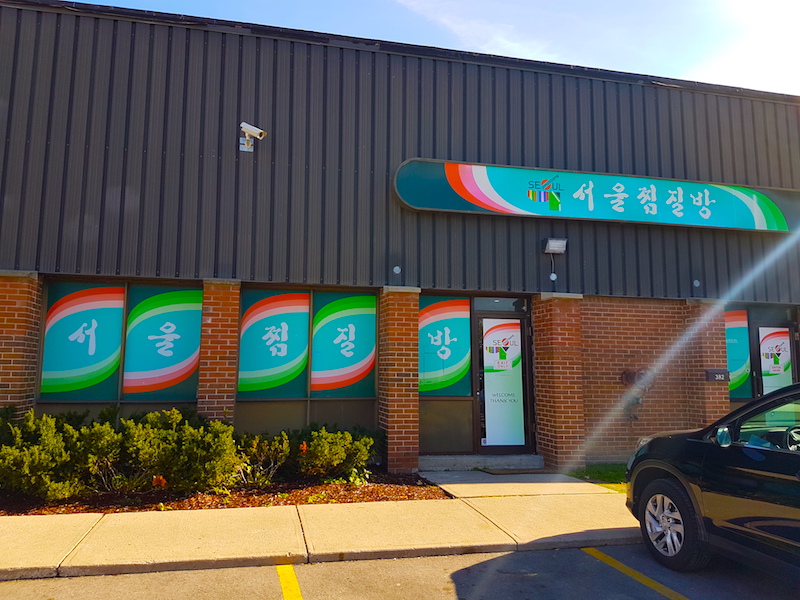 North York is a 2.5-hour drive from my little town, but makes a convenient stop on occasional visits to Toronto.  Coming from downtown Toronto, it would be a half-hour drive.  I'm told there is a bus connection from Finch station, for those who know Toronto.

As the photo above shows, the exterior is reassuringly signed in Korean.  The last thing I wanted was some sort of Canadianized spa experience.  I was looking for a the equivalent of a neighbourhood jimjilbang (I prefer this spelling) like the ones I used to go to in Seoul.

I'm pleased to say that it was EXACTLY like a small jimjilbang in Seoul, from the shoe lockers by the entrance to the middle-aged scrubbing attendant in the bathing section.  The only thing that was NOT like in Seoul was the price.  More on that in a moment.

From the minute I stepped inside, it was clear to me that all the fittings and fixtures of the place had been imported from Korea, starting with the distinctive pale yellow-brown floor covering.  I deposited my loafers in a shoe locker and handed the key to the lady behind the window at the counter.  She then asked for the $25CAD admission fee.  Of course, I already knew from the website what the price was, but the sense memory of reaching into my wallet at such windows in Seoul was jolted by the realization that the bills I was handing over amounted to a price about 3 times higher than I was used to.

Tucking my regulation shorts, shirt, and towels under my arm, I proceeded into the men's changing room.  The towels were the only procedural difference between this jimjilbang and the ones in Seoul.  In the motherland, you're not issued towels at the front desk, they're just free for the taking at the entrance of the bathing section.  At any rate, I was given two.  I didn't need more, but I wonder what the procedure would be if you wanted more.

The men's bathing section was not extensive, but it had the essentials: a hot tub, a cold tub, a steam room, and a scrub room.  The temperatures of the tubs were not posted, but smaller jimjilbang in Seoul wouldn't necessarily do that, either.  I didn't get a scrub or a massage, but I note from reading the website that prices start at $40CAD (!) and advance notice is requested. Oddly, a price list was not posted in the bathing section, perhaps for the very reason that they prefer you to book ahead.

The men's bathing section is a bit faded, but clean.  In fact, the cleaning was in progress when I was there.  This was in the early afternoon.  The attendant did a thorough job, replacing all the soap bars and checking all the shampoo bottles after cleaning the floor and the fixtures.

The co-ed common era -- where you wear the regulation shorts and T-shirt, for those who aren't familiar with jimjilbang -- seems newer and more up-to-date than the (men's) bathing section. There's a giant lounge with numerous vinyl sofas and a snack bar.

The door to the mineral sauna rooms is at the far end of the lounge.  There are half a dozen rooms where you bake for a while to absorb the alleged properties of a given mineral.  I've never seen the point of these, so I just went back to the lounge to lie down for a while.

I saw that the ladies at the snack bar were making fresh kimbap, Korea's answer to sushi rolls, so I ordered one.  It was good, but it cost $5CAD, which is about 3 times what you would pay in Korea.  The snack bar also offers an array of instant ramyeon, and some basic cooked dishes. There's also an impressive selection of imported Korean canned and bottled beverages.  You can get beer, too. 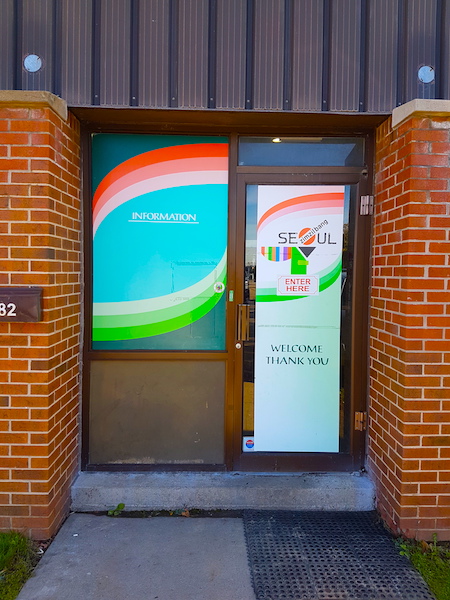 My final verdict: Seoul Zimzilbang doesn't offer a high-end experience, but it does what it needs to do, and it certainly satisfied my nostalgia for my old neighbourhood saunas in Seoul.  I'll go again the next time I'm in Toronto.

You can find the sauna at 382 Magnetic Drive in North York.  Etiquette forbids interior photography, so I've only posted exterior shots here.  You can see photos of the inside and get full details on Seoul Zimzilbang's English-language website: http://ilovesauna.com/contact-us.html.