I love a good palace or stately home museum, and I never pass up the chance to visit one.  When I was driving through Amlapur in eastern Bali in May, 2015, I made a point of going to see Puri Karangasem, the palace of the former rajahs of Karangasem.

Karangasem, which makes up most of northeastern Bali, is one of the nine regencies of Bali, roughly corresponding to the pre-Dutch kingdoms of the island.  The Dewa Agung, or High King, was the Rajah of Klung Klung, which is just southwest of Karangasem.  By the 19th century, the Dewa Agung's authority over the other Balinese rulers was purely nominal.  On the circa 1900 Dutch map below, Karangasem is to the right and labeled "Karang Assam": 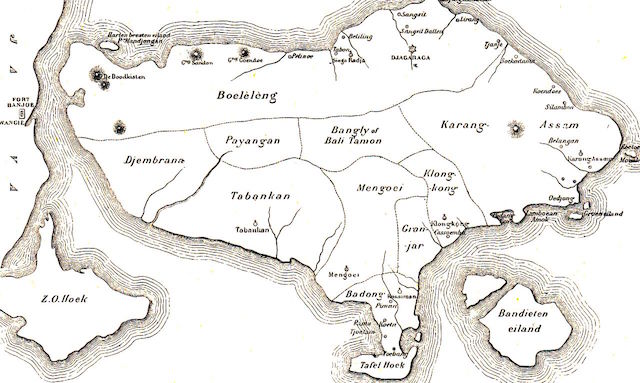 When the Dutch began interfering in Bali in the mid-19th century, the Rajahs of Karangasem were in fact the most powerful of the Balinese kings.  At its height around 1800, the Karangasem kingdom included not just today's Karangasem regency, but nearly the entire northern half of Bali, a large part of the island of Lombok across the water to the east, and even strongholds on Java and Sulawesi.

The last rajah, Anak Agung Agung Anglurah Karangasem (1887-1966), was a Dutch protégé.  Puri Karangasem (puri = palace) is more or less as he left it.  My understanding is that it remains the property of his descendants, some of whom live onsite.

Like all Asian palaces and in contrast to European ones, Puri Karangasem is not a single large building, but rather a collection of buildings of varying size arranged in a series of courtyards which are delineated by walls and gates.  Today we're going to look at the last rajah's personal residence, a hall called Maskerdam, which is the Balinese rendering of Amsterdam.

This hall had been built by the last rajah's predecessor in the late 1890s, one of several halls in the palace named after European cities.  Maskerdam, in European style with Chinese accents, was intended to be used as a place to entertain important visitors, such as the Dutch controleur, the local colonial authority.  The main entrance is pictured below: 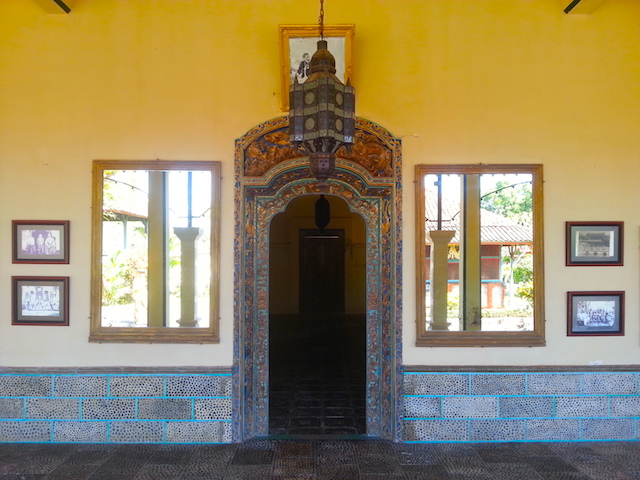 Note the Moorish-style pendant lamp.  For some reason, I didn't photograph the complete facade.  Perhaps the sunlight was too strong.  There are smaller doors to the left and right of this central one.  The picture of the closed door below, which I seem to remember is the one to the right of the door above, shows the rich chinoiserie carving: 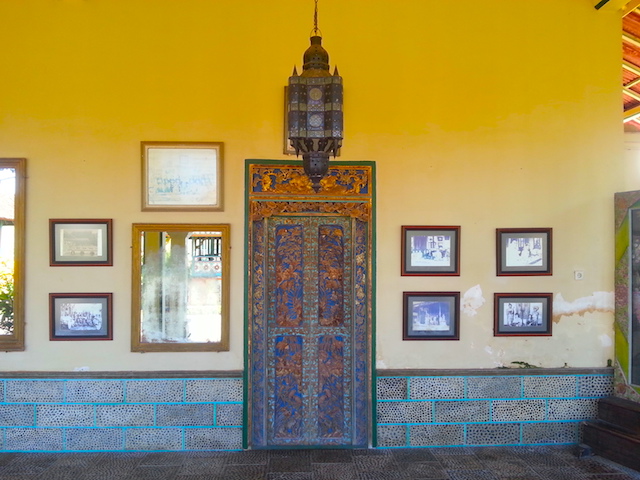 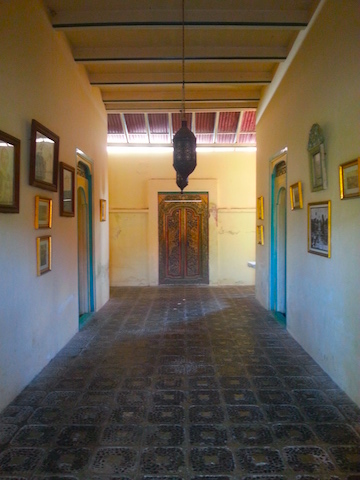 The first room on the left (door not pictured above) is a sort of state reception room.  It features a set of Rococo Revival furniture gifted to the last rajah by Queen Wilhelmina of the Netherlands: 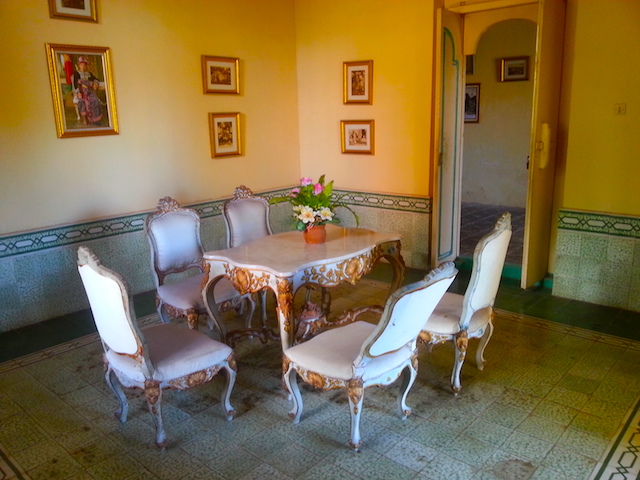 Across the hall is the last rajah's bedroom.  Nowadays it's also a shrine to his memory: 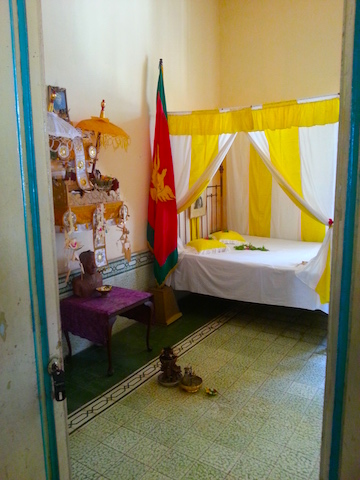 I take the flag to be that of the Karangasem kingdom.  If anyone knows better, please comment.

The other rooms were not open to view on the day I visited with my friends.  I did, however, photograph the view into the courtyard from the main door: 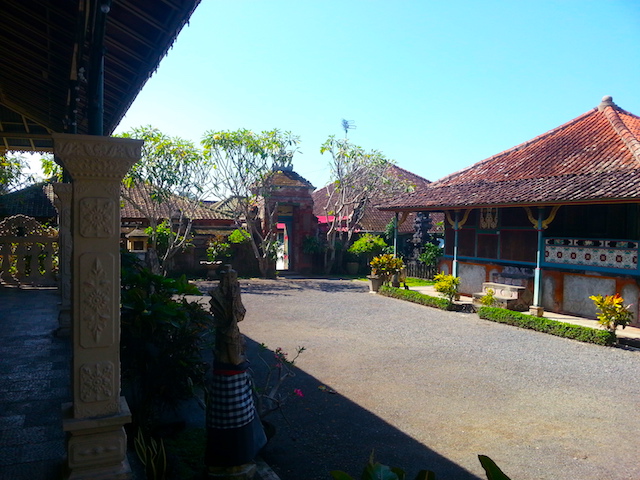 The private quarters of the rajah's descendants still living onsite are through the gate at centre.  To the right is a pavilion that I'll describe in the next of this series of posts on Puri Karangasem.  I took so many photographs that I think there may be 3 posts altogether. 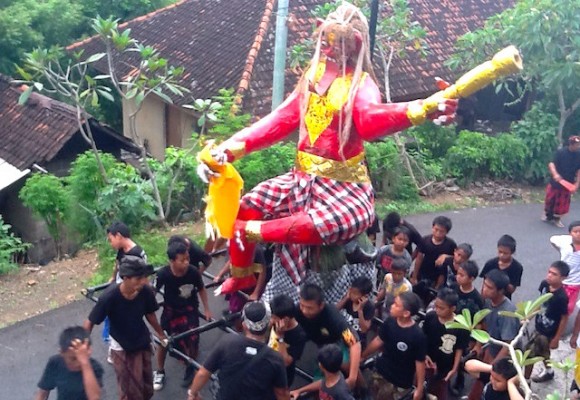 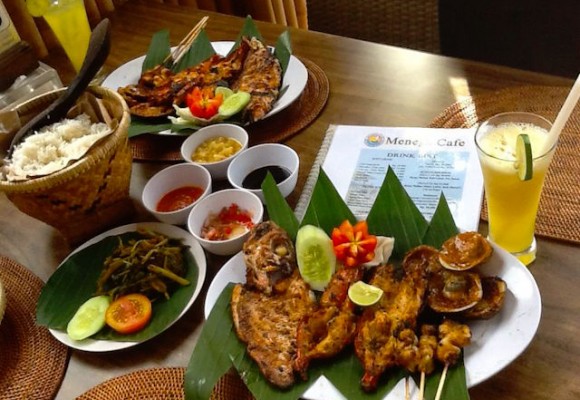 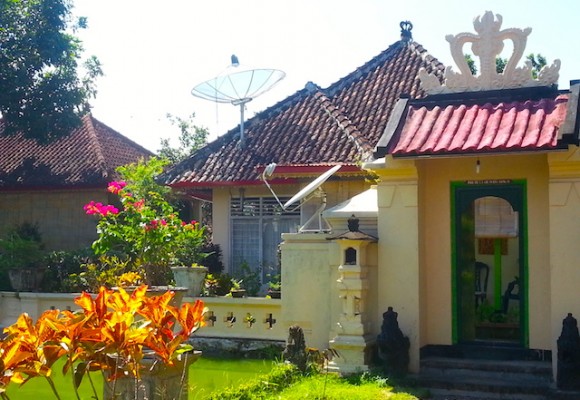 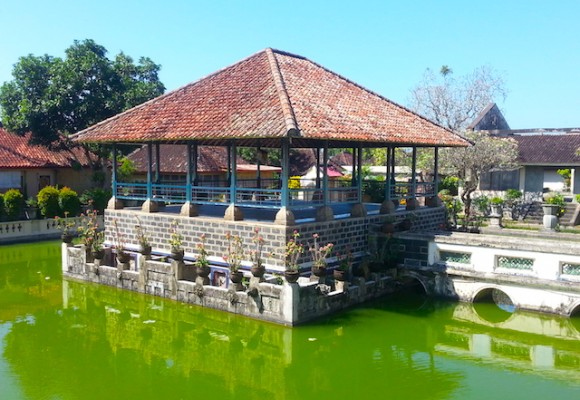 L&P's visit to the palace of the former rajahs of Karangasem continues. 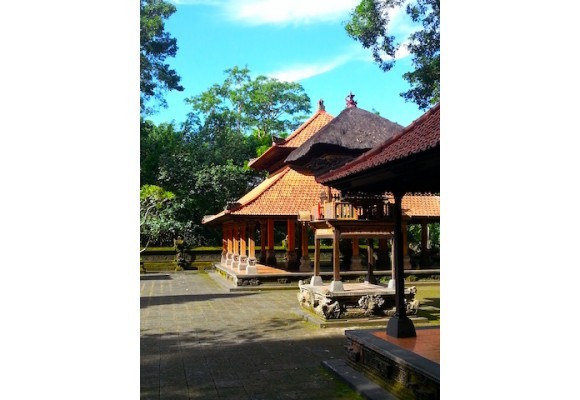 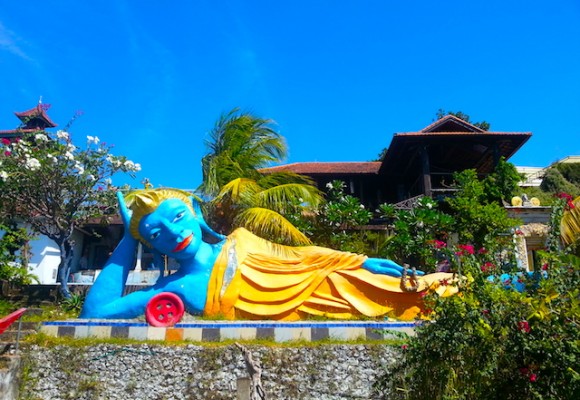